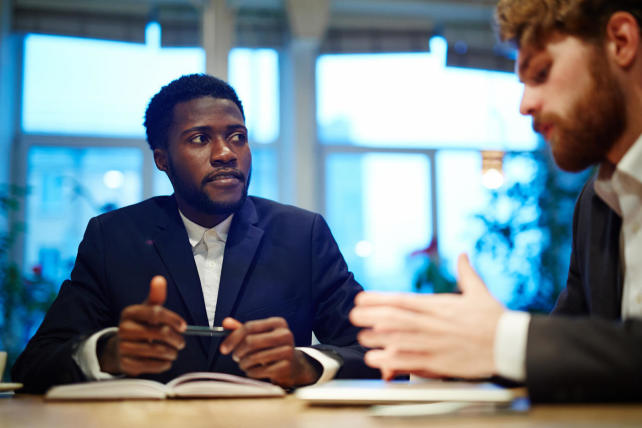 Tom, a recent sales hire, was struggling. He knew his closing ratios were not what they could be. He asked his manager, Victor, for some help in figuring out why.

Victor agreed to sit in on some of Tom’s initial phone discussions with prospective buyers, and to accompany Tom on a couple of his sales meetings. After work, the two went out to lunch together to debrief on everything that had happened, and to see if Victor could offer Tom any insights that might improve his interactions with prospective buyers.

“What’s the most important change you think I could make?” Tom asked. “If you were a prospect, what would make it easier for you to decide to buy from me?”

“Well,” Victor replied, “one thing did jump out at me. I’m a little uneasy about sharing it, though, because it’s something I have had a little difficulty with myself sometimes.”

This piqued Tom’s interest. “Really? What’s that?” he asked.

“I’m wondering whether people are getting a clear enough sense, early on in the discussion, about the kind of value that will be added to their day by choosing to work with you.”

“Well,” Victor said, “it’s possible they aren’t getting a clear sense that you really understand what they’re up against. They may not realize that you have any insights that might connect to their situation. I think that might be why a lot of your discussions are ending without a commitment to a next step.”

“I don’t want to give away the store before anyone has bought anything, do I?” Tom asked.

BE READY TO DISCUSS THE BIG ISSUES

During their initial meetings with prospective clients, some salespeople, like Tom, don’t communicate anything of real value. Sure, they talk about their company’s capabilities. They talk about their products and services . . . and the associated features, functions, benefits, and advantages. But they don’t convey any knowledge or insight about the prospects’ challenges or goals that the prospects didn’t already possess.

One common reason for this is that salespeople are afraid that if they give away too much information, prospects will use it against them. They believe that prospects, armed with the knowledge, will figure out ways to accomplish the outcomes they desire without the salesperson’s product or service.

What they fail to recognize is the difference between discussing concepts and revealing the specifics of implementing those concepts.It’s OK to discuss concepts. In fact, it’s desirable, especially if it helps prospects develop new perspectives on their challenges. After all, prospects must buy into the concept before they’ll buy the product or service to implement it.

With Victor’s help, Tom created a set of targeted preliminary questions he could use during his prospecting phone calls. These questions put the focus of the discussion on
the three most common challenges his company had expertise in solving for that particular industry. During his cold calls, Tom began concisely summarizing those issues and then asking, “Does any of that sound even vaguely familiar?” He got a lot more positive conversations going on the phone as a result of this approach.

Victor also helped Tom to create another list of targeted questions for use during scheduled sales meetings. These questions were more detailed. They were likelier to
be based on information Tom had uncovered about a specific prospect, and they were designed to help demonstrate Tom’s capacity to serve as a focused, experienced problem-solver. They used phrases like:

These questions suggested to prospective buyers not only that Tom had done his homework, but also that his company had a track record that was worth considering.

As a result of these two changes, Tom spent more of his time on his initial calls and meetings discussing big-picture issues with prospects – and exploring problems that mattered to them. As a result, Tom delivered more value early in his discussions. He won more next steps. And it wasn’t long before his closing numbers improved!