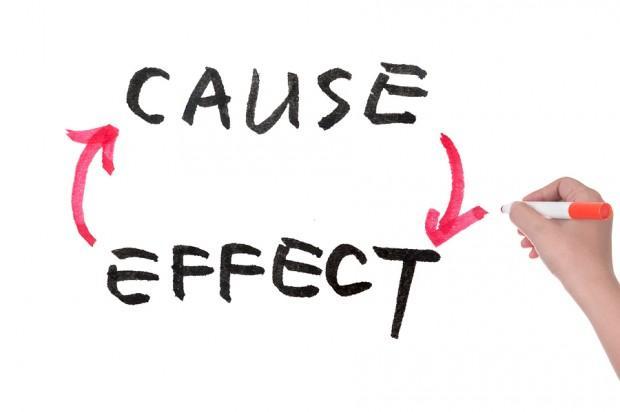 I just finished reading Freakonomics by Steven Levitt. I know, the book is 10 years old and most of you read it a long time ago. I like Malcom Gladwell too. There is something about an economist that can take seemingly boring data and come up with astonishing conclusions that just always intrigues me.

One of the points that Levitt drives home is the difference between correlation and causality. Often we hear that two things are correlated and we assume that one is causing the other. For instance, we hear that the annual death rates in Florida and Arizona are higher than in other states. We know that Florida and Arizona are warmer and sunnier than, say, Oregon. So we may jump to the conclusion that too much sun is a health hazard and is responsible for a higher annual death rate. But the real cause is that older people like to live in these sunny, warm climates and so they tend to retire there. And older people are more likely to… well, you know.

Levitt points out that conventional wisdom says that money wins elections. Whichever candidate has the most money to spend will typically win the election. Money and election victories are correlated, but the money does not really cause the political victory, Levitt says. Rather, the money flows to the strong challenger that has demonstrated he/she might be capable of unseating the incumbent and the money is more of an effect than a cause. Money is hard to raise for a challenger that is perceived to have a low chance of unseating a strong incumbent.

How does this relate to sales and marketing? I see a lot of sellers that are engaging in frenetic activities to set up appointments and land new accounts. Cold calls, networking events, invites to connect on LinkedIn, etc. But they do not track their activities and so they are not sure what is producing results and what is a waste of time.

I also see sellers that have decent pipelines, but they don’t know why some prospects become clients and some don’t. They believe that “sales is a numbers game” and hope that enough will close to pay their bills.

And I see small businesses that advertise and market in a myriad of venues, but they do not know what works and what does not.

Track everything. Develop a prospecting scorecard that you use to track every prospecting attempt and the result it produced, if any. Track attempts, and whether it resulted in a conversation, an appointment, a voice mail, or a sale. Compare this each week with your goals and tweak your behaviors according to results. Share your scorecard with one other person every week for accountability.

Do post-mortems. After you land a new account, ask them “What caused you to work with me? What influenced you the most? Was there anything that gave you pause?” Make no assumptions! Ask them which aspects of your marketing they noticed and liked, and what was persuasive and what wasn’t. When you lose an account, ask them why they initially decided to work with you, and why they are now deciding to stop. Ask if there is anything you could have done differently. Ask current clients on a semi-annual basis what they most appreciate about the partnership, and what it would take for them to fire you.

Focus on results. Demand that every prospecting and marketing effort produces results, and don’t accept excuses. If you spend 45 minutes a day on LinkedIn, what results do you expect from it? In what time frame? If you attend a weekly networking event, write down your measurable goals that you wish to see from this investment of time and money. Put together a plan for how you will achieve it, and set a reasonable time frame (like 4-6 months). Then force yourself to make a decision on a certain date regarding whether or not you will continue to participate in that activity.

Bottom line: you should know what is contributing to your success and what is not. Don’t make assumptions. Ask the hard questions and be willing to do more of what works and less of what seems to not be working.